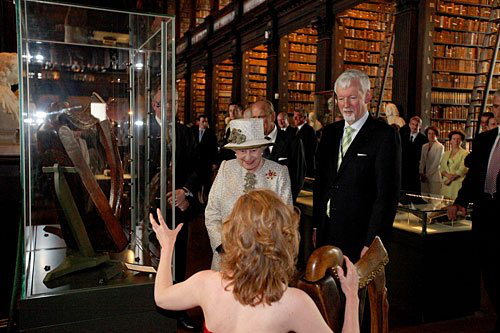 In May 2011, Queen Elizabeth II, the Sovereign of the United Kingdom, was driven past our office.

Like other citizens of Dublin, we waved respectfully. We understand David Cameron, the UK prime minister, is also respectful of her. Nonetheless, she has to watch her step with him; he can politely direct her on important matters. Albeit he must be polite, he is not amenable to being curbed by her because she lacks the institutional capacity to direct him, even if she wished to do so.

In Ireland, the people are the Sovereign. Well, that’s the theory. It’s a good theory, but it’s a bit metaphysical. Consequently, the Irish Sovereign does not drive past our office and cannot do so. Furthermore, the Irish prime minister does not have to be polite to the Sovereign. He is polite, in the sense that he avoids uttering insults but there is an established tradition in the political class in Ireland to slight the Sovereign.

However, for institutional reasons, they are peculiarly inept at that job of representation. They can initiate draft legislation, but they do not do it often. This is unfortunate because legislating is the purpose of the Oireachtas. Instead, other elements of the State initiate and draft the legislation. Then those elements go through a pretence of submitting the Bill to the Oireachtas for debate. But there is no debate. It is blocked and/or curtailed. This process is called “the guillotine”. The head that is cut off is the head of the People.

This process or experience has been the subject of academic discussion for many years. There is evidence that it is about to escape from the academy; political canvassers are reporting a trend from the constituency doorsteps. When learning of a candidate who is not in a political party, the People are responding positively. The People may regret this, but so too will the political class; as it should.

That class is not a pushover; it has taken defensive positions. It has begun a process to empty the word “legislate” of content, by opposing it to the word “administer”. Henceforth, the political class will not need legislation, it will simply administer the Administrative State.