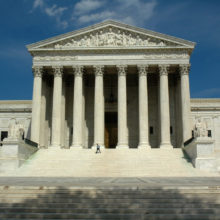 USA -v- Microsoft is an important ongoing case, listed for hearing today before the US Supreme Court. Microsoft have been very firm that the US government’s efforts to make domestic court orders effective outside of the US is not based on a correct interpretation of US law. While lower courts sided with the US, the Federal Appeals Court of the 2nd Circuit found in favour of Microsoft. You can read the amicus brief submitted by Digital Rights Ireland, Liberty and […]

The State parties appealed the judgment of Laffoy J. to the Supreme Court. The appeal came on for hearing before the Supreme Court on 24th October 2012 and finished that day. Judgment has been reserved.

1. It was (arguably) beyond the remit of the High Court inspector to make exhaustive comment on the giving of legal advice to Mr. Jim Flavin (“Flavin”) on the legality of the sale by Flavin of Fyffes’ shares. 2. However, the advice was wrong, the inspector says. (He could hardly say anything else, given that the Supreme Court effectively said the same thing). 3. Consequently, the question as to whether the solicitor who gave that advice was negligent could arise. […]

Trespassers will be prosecuted, including Tour Groups!

However, the history of Ireland is replete with times and periods when very real domestic threats of terrorism existed. Frequently, the Four Courts was the scene of forensic points of conflict between the State and an irregular armed power.

I seem to have picked up the impression that the Irish Supreme Court thinks it is overworked or is burdened by cases without merit.

In considering the requirements of a driver accused of drink driving offences the Supreme Court has decided that the words: require the person to provide, by exhaling into an apparatus for determining the concentration of alcohol in the breath, 2 specimens of his breath and may indicate the manner in which he is to comply with the requirement” mean that a person need only, on request by a Garda officer, provide two specimens of his/her breath and need not supply […]