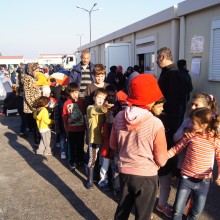 It is in Ireland’s interest (and the interest of the people of the EU) that the European Union endure. It is possible that the European Council http://europa.eu/about-eu/institutions-bodies/european-council/index_en.htm (including Enda Kenny) made a major error on 18th March 2016 (two days ago), undermining the EU. Reputedly, the European Council agreed the terms of a Joint Action Plan with Turkey. Currently, the exact terms of the Joint Action Plan have not been released to the public. Instead, the public has been issued […]