Some Reaction to Irish Newspapers demanding money for links 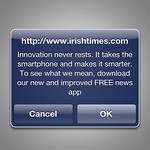 On Sunday night, we published our post 2012: The year Irish newspapers tried to destroy the web on the efforts of the Irish newspaper industry to assert property rights over links.

The post has provoked a good deal of comment. For convenience, we have collected up a few of the responses.

Hugh Linehan, the Editor of IrishTimes.com:

When I talk about “legacy” media it’s not some buzzword. It has a referent. Behavior like this: bit.ly/UiBc2I via @tkeala — Jay Rosen(@jayrosen_nyu) January 1, 2013

Breathtaking MT @jayrosen_nyu: When I talk about “legacy” media it’s not some buzzword. Behavior like this: bit.ly/UiBc2I via @tkeala — George Brock (@georgeprof) January 1, 2013

I hate to use the word “idiots”, but sometimes that’s the best fit: The year Irish newspapers tried to destroy the web mcgarrsolicitors.ie/2012/12/30/201…

Newspapers demand to be paid if you link to them by Rob Beschizza, BoingBoing.net

To be completely clear about it, this isn’t about fair use, fair dealing, excerpts, headlines or anything like that. It’s about links
…
It’s as if the newspaper business was still run by clueless middle-aged white drunks, or something.

It’s wrong, pure and simple. No if, no but and no maybe about it. It’d be interesting if they went after Google. Still wrong but interesting. And yet it’s not Google they went after, it’s Women’s Aid. What does that say about the mentality and morality of the National Newspapers of Ireland and their agents?

Your eyes will pop at the amounts.

I would link to any coverage the matter had received in Irish Newspapers but there still has been none.