2012: The year Irish newspapers tried to destroy the web 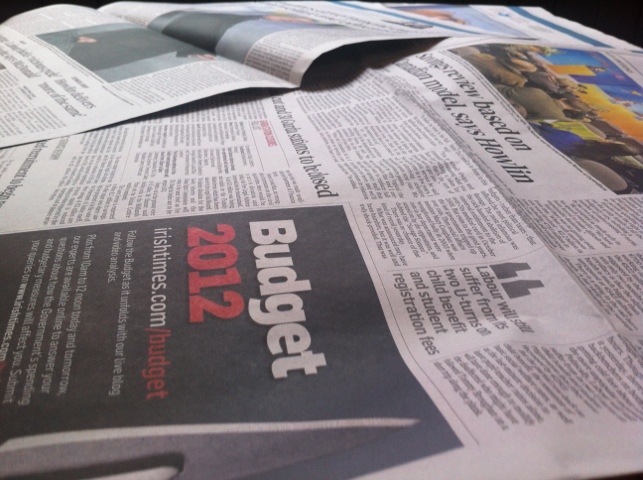 This is not a joke.

I have started with that clarification, because as you read this you will find yourself asking “Is this some kind of a joke?” I thought I would be helpful and put the answer right up at the start, so you can refer back to it as often as you require.

This year the Irish newspaper industry asserted, first tentatively and then without any equivocation, that links -just bare links like this one– belonged to them. They said that they had the right to be paid to be linked to. They said they had the right to set the rates for those links, as they had set rates in the past for other forms of licensing of their intellectual property. And then they started a campaign to lobby for unauthorised linking to be outlawed.

These assertions were not merely academic positions. The Newspaper Industry (all these newspapers) had its agent write out demanding money. They wrote to Women’s Aid, (amongst others) who became our clients when they received letters, emails and phone calls asserting that they needed to buy a licence because they had linked to articles in newspapers carrying positive stories about their fundraising efforts.
These are the prices for linking they were supplied with:

They were quite clear in their demands. They told Women’s Aid “a licence is required to link directly to an online article even without uploading any of the content directly onto your own website.”

Recap: The Newspapers’ agent demanded an annual payment from a women’s domestic violence charity because they said they owned copyright in a link to the newspapers’ public website.

This isn’t the case of a collection agent going rogue.

The National Newspapers of Ireland is the representative body for Irish Newspaper Publishers. The 15 member titles in the NNI are

“It is the view of NNI that a link to copyright material does constitute infringement of copyright”. (Section 7 National Newspapers of Ireland Further Submission to the Copyright Review Committee)

Women’s Aid received their demand from Newspaper Licensing Ireland Ltd (NLI), a collection agent for the Newspaper publishers. Here’s what that agent has to say about the status of links to newspaper websites:

“It is the view of NLI that a link to copyright material does constitute infringement of copyright”
(Page 5, Newspaper Licensing Ireland Ltd Further Submission to the Copyright Review Committee)

The National Newspapers of Ireland describes the relationship with NLI like this:

The National Newspapers of Ireland and Newspaper Licensing Ireland both have the same address; Clyde Lodge, 15 Clyde Road, Ballsbridge, Dublin 4.

Given this congruence, it is unrealistic to treat Newspaper Licensing Ireland’s demands and assertions as something separate or distinct from the demands of the Newspaper industry itself.

Every one of those 15 newspaper titles- and all the regional titles who are members of Newspaper Licensing Ireland- have endorsed the proposition that they have rights over links to their websites. Furthermore they want an explicit change in the law to back up their demands for money if you link to their websites.

Here’s what the NNI say:

“NNI proposes that, in fact, any amendment to the existing copyright legislation with regard to deep-linking should specifically provide that deep-linking to content protected by copyright…is unlawful.”
(Section 7 National Newspapers of Ireland Further Submission to the Copyright Review Committee)

Here’s a test. Ask any of the Editors of any of those newspapers listed above the following question. “Do you accept that people have the right to link to any page on your website?” Ask them online, or at a public meeting, perhaps. They will hotly respond by answering a question they haven’t been asked. They will say that they have always given people permission to link to their websites, when asked.

“on every occasion that NLI has been approached by a third party seeking to licence a form of copying or transmission not covered by any of our existing standard licences, we have sought to find a solution to that company’s requirement.”
(Page 1, Newspaper Licensing Ireland Further Submission to the Copyright Review Committee)

@tupp_ed @devore I regularly receive queries from people who want to link to us. I have yet to refuse.

Both the above statements are worded to maintain the position that linking to newspaper websites is within the grace and favour of newspapers to grant- or by implication to refuse. And, by further implication, to charge for if they so wish. You can see the kind of prices they’re thinking of, above.

None of this has received any coverage in any newspaper for sale in Ireland. Not a drop of ink has been used to report on the print media’s lobbying to have their assertion of copyright over links written into legislation, in any Irish newspaper.

You can read about this story in the New York Observer,on Techcrunch, on Techdirt or, if you prefer not to look to the international press you can turn to Michael McDowell’s news source of choice Broadsheet.ie. But, apparently, it isn’t a story for Irish newspapers.

The web is built on links. Links are what has made it so powerful and so threatening to established institutions of power.

Here’s Tim Berners-Lee, writing on Links and Law Myths in April 1997 under the heading Myth One

Myth: A normal link is an incitement to copy the linked document which infringes copyright.

The ability to refer to a document (or a person or any thing else) is in general a fundamental right of free speech to the same extent that speech is free. Making the reference with a hypertext link is more efficient but changes nothing else.
…
I received a mail message asking for “permission” to link to our site. I refused as I insisted that permission was not needed.

There is no need to have to ask before making a link to another site.

In 2012, Irish newspapers- The Irish Times, The Irish Independent and all the others- are trying to make this myth a reality here.

This is not the story of a rogue agent.

This is the story of a rogue industry.

UPDATE: You can read some reaction (and confirmation) of the above here. Features Jeff Jarvis, Jay Rosen, Boing Boing and others. Does not feature any coverage from any Irish newspaper as there has been none.