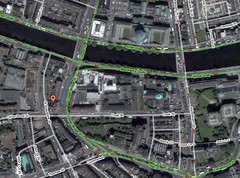 The website has a photograph from outer space showing our location in Dublin. (Courtesy of Google).

Here is a map of Dublin from a time before 1670. . We are very close to Bridge St., which carries its name in reference to the only bridge (5) over the Liffey at Dublin, (until 1670, when “Bloody Bridge” was built nearby). 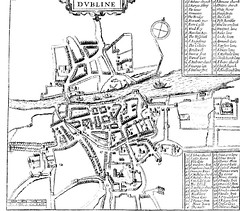 Dublin pre-1670
Current development, in St. Augustine St. beside us, helps to show this also. Portions of the soil, in the excavation for the basement of the development, show dark organic soil at some depth, as might be associated with river mud.We are therefore, just outside the city wall and gates, on the western side. This, compared with the eastern side, was the place to be.

Long before the building of “The Colledge” (Number 12 on the old map), the Normans took the city from the Danes in 1170. The king of the Danes was Hasculf. He fled by sea and returned a year later with 60 ships full of men. The complement of men included John the Mad, a berserker. Hasculf landed on the south bank, east of the city and formed up on land running from where “The Colledge” is shown, to Ringsend. They launched the attack on the city from the east, at Damas Gate (14) (Dame St.) but were thrown into confusion by an attack by a small force of cavalry on their rear, followed by a full scale assault pouring from the Damas Gate. John the Mad fairly acquitted himself but was overcome and Hasculf himself was captured. His surviving men fled by ship for their lives.At this point Hasculf revealed an aspect of his character typical of many people confronted by power; he vowed he would speedily return. He was promptly beheaded.Then, as now, the lawyers must have had their offices at the western gate. 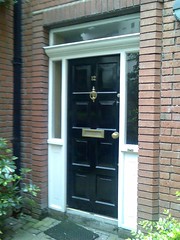