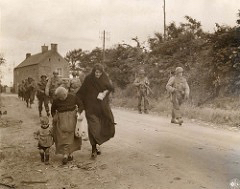 Jean Claude Juncker has cited previous refugee crises in proposing the settlement of Syrian and other refugees in the EU.

He needed to look no further back in time than to 1945, and to look at Europe itself.
In preparation for administering Nazi-dominated Europe, the Allies estimated that 11.469 million people were “refugees” in Europe, with 7.738 million of them being in Germany itself. (Many were slave labourers in the Reich). The European nationalities were represented in the following proportions:

Misc
NEED LEGAL ADVICE? Contact us for a callback