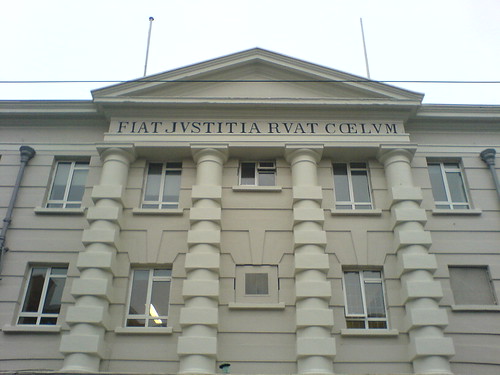 The Bridewell, originally uploaded by Editor_Tupp.

1. The title phrase (Fiat Justitia Ruat Caelum: “let justice be done, though the heavens fall”). is incised in the stone above the entrance to the Bridewell police station in Chancery Street, behind the Four Courts. This has the appearance of an error; the District Court adjoins the police station (they are connected by an underground passageway to securely transfer prisoners from one to the other) and the phrase, logically, belongs on the court rather than the station.

2. The notion of bringing the powerful low and shaking the foundations of the State in the High Court, let alone in the District Court behind it, sits uneasily with the current State view of the modern law of Judicial Review as embodied in Order 84 of the Rules of the Superior Courts.

3. Judicial Review is a concept arising in “public law issues” or “proceedings”.

4. Order 84 of the Rules of the Superior Courts defines the Judicial Review procedure in the High Court. Under the rule and the case law, an applicant is obliged to move very fast and seek the assistance of the Court as soon as possible.

5. Consequently, where the applicant has not done so, the Respondent (the State) very often seeks to rely on delay to preclude the raising of “public law issues”. The ostensible basis for these submissions is the alleged overriding necessity for certainty and stability in the deployment of administrative decisions. The attack normally takes the form of a request for a trial of a preliminary issue on a point of law before the applicant is permitted to address the factual basis for his or her case.

6. Occasionally, where the applicant has been granted leave to take Judicial Review proceedings the Respondent has appealed the decision. The Supreme Court in Gordon v Director of Public Prosecutions (([2003] 1 ILRM 81)) settled the question of the burden of proof on such applications as being heavier than the burden already discharged by the Applicant, namely to make an arguable case; on an application to have leave set aside, the standard is to demonstrate that leave should never have been granted, “a negative proposition”

“Further, I see no logical reason why delay, however long, should of itself disentitle the certiorari applicant for that remedy who can demonstrate that a public wrong has been done to him – that, for instance, a conviction was obtained without jurisdiction, or that, otherwise, the State has wronged him and that that wrong has continued to mar or mark his life”.

8. The Courts have not shown themselves fully committed to the State view on these matters. In Windsor Refrigeration Company Ltd. v. Branch Nominees Ltd. (([1961] Ch 375)) Lord Evershed stated;

“The course which this matter has taken emphasises as clearly as any case in my experience has emphasised the extreme unwisdom – save in very exceptional cases – of adopting this procedure of preliminary issues. My experience has taught me (and this case emphasises the teaching) that the shortest cut so attempted inevitably turns out to be the longest way round.”

“In addition, it must appear to the Court to be convenient to try such question of law before any evidence is given. This will involve a consideration of the effect on other issues in the case and whether its resolution will reduce these significantly, or shorten the hearing. Convenience in this respect must also be considered in the light of what appears fair proper and just in the circumstances.”

The Supreme Court upheld the refusal of the High Court to direct the trial of a preliminary issue in the case.

“Having regard to the range of matters which fall to be considered under this heading – and the six specific factors mentioned in De Róiste are expressly stated not to be exhaustive of the matters to be considered, I doubt whether it will normally be useful to deal with alleged applicant delay as a preliminary issue.”

11. The phrase “public law issues” is not immediately comprehensible ((See Administrative Justice: Some Necessary Reforms – Oxford University Press 1988)). It is generally used in a context such as that found in Becker v Duggan ((High Court, 2nd November 2005, O’Neill J.)). In that case the applicant sought an order of Certiorari against her employer, an institute of education. The respondent claimed the relationship was a private one of contract with no public law element. The court found there was a public law element, and granted the relief sought. The case is typical of the context in which these matters come to be considered. The question is, usually, “is this case amenable to Judicial Review?” rather than ” is this case not amenable to Judicial Review?”

13. Inherent, usually, in the State’s statement of the issue is the suggestion that “Public Law” embraces any issue arising as a challenge to any act involving the State. Furthermore the State tends to conflate “Judicial Review” (as arising from Order 84 of RSC), with actions challenging the State on constitutional grounds. The “constitutionalization”, in Ireland, of the prerogative orders ((e.g. Audi Alteram Partem)) originally available in “State-Side” applications predating the adoption of the Constitution has rendered questionable the idea that concepts capable of being applied to the old State-Side Orders, such as Certiorari or Prohibition, continue to apply in every degree simply because those are the reliefs being prayed for. ((McCormack v Garda Siochana Complaints Board [1997] 2 IR 489)) In short, the State, having asserted that the proper relief for the Applicant was to be found within Order 84 proceedings, defines the entitlement of the Applicant by reference to the indicated form of the action at the expense of looking at the grounds from which the Applicant’s claim arises. Conventionally, Judicial Review is not about the merits of a decision but about procedures. However, constitutional claims are about the merits, and sometimes the procedures.

14. Even assuming such a view of the State is correct the onus resting on the State would be to prove:

a. That the issues proposed are justiciable.
b. That the relevant “public law” act involved an obligation to act judicially; ((State (Crowley) v Irish Land Commission [1951] IR 250; R v Corporation of Dublin [1878] 2 L.R. IR. 371; Cassidy v Minister for Industry and Commerce [1978] IR 297))
c. That Order 84 proceedings are indicated, no claim of a breach of a constitutional right arising (which would indicate Section 11 (2) of the Statute of Limitations 1957 applies ((Tate v Minister for Social Welfare [1995] IR 418))).
d. That the Applicant is not entitled, on the facts, to an extension of time to take Order 84 proceedings.
e. That the only effective remedy, which the applicant could obtain on facts available to be established by the applicant, would be an order by way of judicial review under Order 84 RSC or, if there be an alternative remedy, that the application by way of judicial review is, on all the facts of the case, a more appropriate method of procedure.(( G. v Director of Public Prosecutions [1994] 1 IR 374)) ((Thus, in circumstances like those in Riordan v An Taoiseach (No. 2), Judicial Review is contra-indicated))
15. In Meskell v CIE (([1973] I.R. 121)) the Supreme Court indicated that constitutional rights could be enforced even if the claim did not fit within any currently available jurisdiction or procedure, in law or in equity. In Shannon v Ireland ((1984] 4 I.R. 343 at 350)) the High Court varied the usual rules of procedure to assist in the making of a claim in vindication of a constitutional right. In Riordan v An Taoiseach (No. 2) (([1999] 4 I.R. 337)), Barrington J. further elucidated the principles to be applied, in favour ((In that case where the primary relief sought was a challenge to an Act)) of the broad jurisdiction of plenary proceedings as opposed to judicial review. Consonant with this view is the fact that breach of a constitutional right is a tort ((McDonnell v Ireland [1998] 1 I.R. 134; Schmidt v Home Secretary of the Government of the United Kingdom High Court 22/11/1994)) and consequently the provisions of S. 11 of the Statute of Limitations 19577 apply.((McDonnell v Ireland [1998] 1 I.R. 134 (majority, with dissent)))

16. The State position will usually founder on the fact that trial of a preliminary point of law will be ordered only where all the issues on the proceedings will be determined by a finding on that point, this being a principle applied in any form of proceedings, not just Judicial Review. ((Or, is dispositive of the issue, as, to my distress, my colleagues have begun to express it))