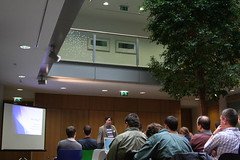 I attended Barcamp on Saturday, held in Enterprise Ireland’s Webworks Building in Cork. Digital Rights Ireland‘s Chairman TJ McIntyre had asked me to give a talk about their court case challenging Data Retention.

The day itself was very impressive- all thanks to the efforts of the organisers- and the grid of talks soon filled up with an impressively varied choice of topics.

My presentation was first, and I ran through who DRI were, what the legal background to the introduction of Data Retention was in Ireland and at EU level and then why DRI believed that it was illegal. Finally, I talked about some of the consequences a successful challenge would have for all of Europe’s citizens and then took a few questions.

It turned out that there was quite a lively degree of interest in the topic. So much so that a smaller group of people retreated to a second room to discuss some of the issues raised in more depth. They were mostly concerned with developing practical steps they could take to help DRI.

Though I nominally chaired this discussion, the individuals themselves did most of the thinking and then reported back to the wider group after lunch with their suggested actions.

The day was very enjoyable- everyone attending seemed to be filled with ideas and enthusiasm for what they were doing and for hearing from other people. I attended a good few talks through the day and was never bored- a rare treat for a conference.

The only sour point in my trip came when I had to encounter Irish Rail’s service back to Dublin. Non-flushing toilets and having to get off at Newbridge and be bussed into Heuston Station meant that my journey home was not as pleasant as the events which had preceded it.